Halas Hawks are a well-established Charter Standard Community Club based in Halesowen and the following teams are looking for players to add to their squad for the coming season.

All the Halas Hawks managers details can be found under ‘Team managers’.

Our U6 coaching sessions for children in reception and year 1 have now re-started and are held at a brand new 3G facility at Halesowen College, Whittingham Road, Halesowen, B63 3NA.

The sessions are held between 9am and 10am on Saturday mornings, but due to the increased cost of the venue, we will be charging £3/session. 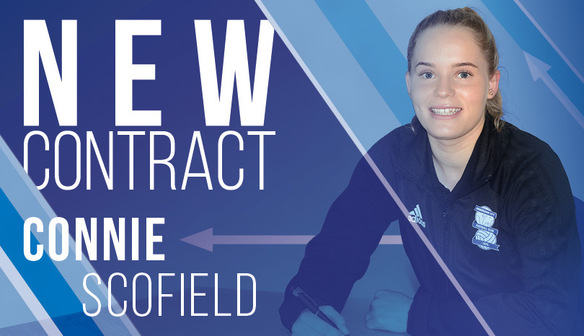 Scofield, 18, is the latest rising young star to come through the Blues Ladies Development side.

“I am delighted to sign for the team that I have grown up with,” she said. “It is something that I have always hoped to do. It is very exciting and it shows that girls like me can go through the youth pathway.”

Scofield, from Halesowen, played for boys team Halas Hawks before joining Blues at the age of nine.

She has followed a route that was trodden by one of her inspirations and another local heroine, Blues Ladies Captain Kerys Harrop.

And it is one that required plenty of graft.

“Yes a lot of training hours, getting wet and cold, but when you are doing something that you love you don’t mind. I was always aware of Kez’s pathway as she also played through the centre of excellence like me, which was inspiring.”

Scofield knows that it is just the beginning; she intends to try and better her own game and force her way regularly into Manager Marc Skinner’s plans.

Her immediate aims are “to continue to improve as a player, listen to advice and play as much First Team football as possible”.

She added: “A lot of hard work will be needed if I want to improve and be an important member of the squad. I have a great team to work with and great coaching staff too and we all try to get the best out of each other.”

Halas Hawks are proud to announce that we are an “SSE Wildcats Centre”.

The Football Association and SSE have teamed up to launch a new initiative, SSE Wildcats, designed to inspire girls aged between 5-11 to be involved in the sport.

SSE Wildcats Girls’ Football Clubs will provide girls with regular opportunities to play football and take part in organised sessions in a fun and engaging environment created exclusively for girls.

The clubs will run from spring through to summer on a weekly basis with activities such as football-fitness sessions on offer for those bringing children too.

The initiative follows the launch The FA’s Gameplan for Growth, which outlined the target of doubling girls’ participation in the sport by 2020.

Each SSE Wildcats club will be run in conjunction with local County FAs and utilise qualified coaches and local facilities to offer girls a location nearby where they can get involved.

SSE Wildcats has been launched ahead of the Lionesses heading to the Netherlands for the UEFA Euro 2017 tournament in July.

She said: “I attended a similar FA initiative as a child and that was when I first fell in love with football.

“Hopefully the girls attending the SSE Wildcats clubs will get the same enjoyment I did and stay involved in the game for years to come.”

Kelly Simmons, FA participation and development director, added: “SSE Wildcats is a great way for young girls around the country to get involved with the game at a crucial age.

“We know the sooner girls start to play and enjoy football, the more likely they are to stay involved as they grow up. These clubs provide a great resource across England’s County FAs so there’s an opportunity to play the game wherever you are.”

John Stewart, SSE’s director of human resources, said: “We’re delighted to support The FA in setting up these centres for 5-11 year old girls, where they can come together to discover new skills, make lifelong friends and ultimately have fun.

“At SSE we believe everyone deserves the same opportunities, regardless of gender. We’re proud to support the SSE Women’s FA Cup; a competition which gives opportunities to clubs across the country no matter how big or small. And it’s why, together with The FA, we’ve created SSE Wildcats. After all, the game’s more beautiful when it’s open to all.” This article was sourced from the Sports Page of the Express & Star.

Since the start of the Season we have been working closely with our FA Mentor, Rus Smith.

Rus was assigned to us, as a Charter Standard Community Club, with the aim of developing
coaching, and therefore the standard of our players.

Currently working on his UEFA A License, Rus also tutors FA Level 1 badges and currently
coaches Aston Villa WSC U21s. He also works as an FA Development Coach and Coach Educator
at St. George’s Park and throughout the West Midlands.

The impact with the teams under his tutorage has been immediate. Managers and coaches have
taken on board new ideas and approaches and are implementing them in their weekly sessions. The standard of our players can only improve in relation to this, although this is a more long term impact.

Our senior committee members have worked closely with Rus and have also begun to develop
our practice, especially with regard to new volunteers.

We lose Rus at the end of the season but the impact on our club will remain in place for
years to come.

This video from the NSPCC shows several children involved in different sports describing how the behaviour of parents/spectators deteriorates when they wear their ‘magic sports kit’ — i.e. when they compete. They talk about a range of bad adult behaviours and how these negatively impact on them. They then describe and promote positive behaviour. For more information, please visit: https://thecpsu.org.uk/resource-library/?topic=2811 Congratulations to Halas Hawks Club Secretary Bob Hickman who, at a Dudley CVS awards ceremony held at Brierley Hill Civic Hall on 13th October – was presented with the ‘Sporting Champion of The Year 2012’ award, thus recognising his voluntary work with Halas Hawks JFC and as Treasurer & President of  Halesowen Athletic & Cycling Club. Speak to someone at the CEOP. The CEOP is a law enforcement agency and is here to keep children and young people safe.